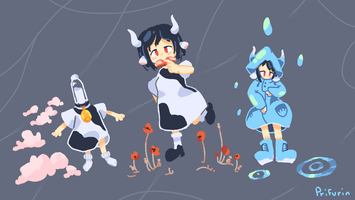 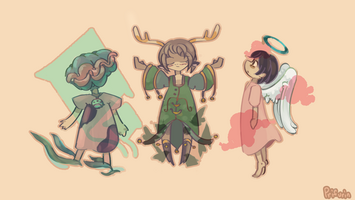 After a while, we're back with exciting news on the Moonday develoment! The new version of the demo (0.37.8) was released just yet, featuring changes in some features and bugfixes:

Migration to Godot engine was successfully done, with minor tweaks for now

During the Dream Diary Jam 5 I was happy to work with Nullifi, composer who remixed 4 tracks for Moonday for 0.37 release OST - Koi Bog map track, title theme, City map track and Barn (Daytime) track, and I'm glad to announce they are joining the development for the full release of the game, which is estimated to be around Christmas 2021 primarily on Itch.io and Steam.

After over a year of working on Moonday, with a lot of breaks and distractions, I'm returning to pay attention there closely. And I feel that the game's art direction starts to feel a little dated in comparison to how my skills evolved over the time. That said, I'm going to overhaul the existing game graphics - in order to both be consistent with fresh upcoming content and reignite my passion for the game. Since, to be honest, no matter how I like the ideas and atmosphere which went there, being absent from directly working on it made my memories and feelings of this experience stale and lacking of "juice" X'D

So we can expect new look and feel of Moonday to arrive around September 2021 if things go well, and a playable demo(I consider the current one rather an alpha build, so it will be a beta, the final before release), finally with some main gameplay such as effects and more new worlds, later same or the next.

Also after realizing the gap between devlog entries is more than two months, "weekly" is barely actual anymore, so rather I'm switching it to "monthly" and planning to release more news in the August, stay tuned!

a cow girl meets an alien